Many of the luxuries and comforts we enjoy today are due to the advances made in the realm of science. Every day we benefit from technology that we could no longer function effectively without. A one-day loss of internet communications, for example, could potentially put a wrench in society for weeks to come. Because of science we can spot approaching comets from millions of miles away, potentially giving us the ability to save humanity from possible disaster. We are the only species on the planet capable of doing such things. While science has benefited us in terms of comfort and technical knowledge, it has also come with consequences. The scientific method, as noted by Bertrand Russell in The Impact of Science on Society, has influenced everything from the way we view traditional and religious beliefs, how our societies are organized, and how man thinks about his place in the universe. Science has challenged the Christian worldview with doctrines like Darwin’s theory of evolution, which strips man of any divine purpose, and proposes we are just advanced animals. Humanists also state that modern advances in scientific prowess are forcing world religions to come to terms with newly discovered truths. They go as far as to argue that a new religion, based on man’s scientific understanding of the universe, is in order. Aligning themselves with Darwin, they argue that man is a part of nature and emerged because of natural processes. Behaviorist B. F. Skinner wrote, in Science and Human Behavior, that “there is no point in furthering a science of nature unless the focus is on human nature” itself. Skinner argued that the understanding of human behavior will lead to the possibilities of greater social control, and the development of a science of behavior will restore order to human affairs and enable us to control the future.

The application of the scientific method is an effort to discover a natural order in our surrounding environment, an attempt to control nature. If natural order can be observed in daily events, then it must be assumed that it has existed from the beginning. This, according to Skinner, applies to human nature as well. Skinner suggests that there must be a natural, lawful explanation for the way humans behave. Once these lawful relationships are discovered, man’s behavior can be controlled and predicted. In Beyond Freedom and Dignity, Skinner states that to study human behavior effectively, it must be done from what he calls the scientific view. The pre-scientific view, Skinner writes, suggests that men are in control of their behavior, and responsible for their own successes and failures. The scientific view takes on more of a Darwinist appeal, as man’s behavior is now more attributable to his environment and evolutionary history. Control of the environment, in this view, equals control of behavior. Skinner argued that men are shaped by their environments. From the earliest of ages, our actions are dictated by our surroundings. This became the basis for his theory of operant conditioning. 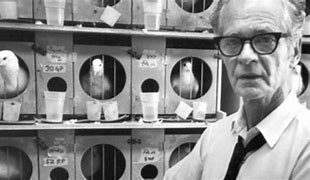 “In what we may call the pre-scientific view (and the word is not necessarily pejorative) a person’s behavior is at least to some extent his own achievement. He is free to deliberate, decide, and act, possibly in original ways, and he is to be given credit for his successes and blamed for his failures. In the scientific view (and the word is not necessarily honorific) a person’s behavior is determined by a genetic endowment traceable to the evolutionary history of the species and by the environmental circumstances to which as an individual he has been exposed. Neither view can be proved, but it is in the nature of scientific inquiry that the evidence should shift in favor of the second. As we learn more about the effects of the environment, we have less reason to attribute any part of human behavior to an autonomous controlling agent. And the second view shows a marked advantage when we begin to do something about behavior. Autonomous man is not easily changed: in fact, to the extent that he is autonomous, he is by definition not changeable at all. But the environment can be changed, and we are learning how to change it. The measures we use are those of physical and biological technology, but we use them in special ways to affect behavior.” (Skinner, 1971, pg. 101)

This brings into sharp focus the possible consequences of viewing man strictly through the lens of science. This is one way in which the scientific method has challenged the traditional views which have governed men for so long, as suggested by Russell because it brings into question the nature of man. Are we free, and in control of our own actions, or is there a pre-determined law to our behavior? A law that can be observed, studied, and applied to bring order to the world? This is a question which must be answered, according to Skinner, because it is the conflict between these two views, and an inability to settle on one consistent course of action in solving the world’s problems, which prevents us from doing so. In other words, Skinner is blaming societal chaos on the conflict between science and religion, and the failure of men to accept a science of behavior as the answer.

What this debate eventually comes down to is free will, which Skinner denies exists, or determinism, which is the basis of Marxist thought. Determinism argues that men freely choose the options which the environment ultimately controls. What appears to be a free choice, is merely an environmental circumstance where man is forced to make the decision that advances his interests. According to the book, The Naked Communist, economic determinism dictates the progress men would make in advancing from capitalism to socialism because they would be forced to choose, due to environmental influences, the option which allegedly provides for more financial security. Free will, according to the Marxists, because they have adopted a Darwinist view of man, is non-existent. It is nothing more than “the awareness of the impelling forces which move an individual to action; in taking action he is not free to change the course his very nature dictates.” A nature which Skinner has argued can be controlled once its relationship to the natural order can be discovered.

To the Christian, free will marks our abilities to choose between good and evil, accept responsibility for our actions and generally, be in control of our own lives. Free will was given to us by God so we can freely choose to follow him. It is also what separates us from us other animals. These are the attributes that Skinner suggests should be discarded in viewing behavior from a scientific perspective. It is the insistence of clinging to the antiquated idea that men are free to choose their own course of action, the existence of a God, and universal morality, which have prevented science from establishing systems of control in our chaotic world. Wouldn’t the view that man is no different than any other animal, and that our behaviors need to be contained, be more of a contributing factor to this chaos? Darwinist doctrine argues that man has no significant moral standing in the natural order. While we may be a more advanced form of animal in our abilities to seek reason and make sense of the world around us, we are still an animal, nonetheless, according to Darwinists.

The twentieth century bore witness to some of the greatest atrocities known to man. Governments, driven by Godless doctrines, and beliefs that men exist to serve the betterment of the state, murdered millions in pursuit of their ambitions. After World War II, despite these atrocities, it was argued by Brock Chisholm, in his paper, The psychiatry of enduring peace and social progress, that the belief in a universal morality, or a definitive right and wrong, is what led to war and suffering. Psychology and psychiatry would be used to change the nature of man to prevent such conflicts from happening again. It is the conviction of truth as a universal concept, writes Chisholm, that prevents maturity and rational thinking, and bowing down to the doctrine of sin and the existence of evil, which has prevented true progress. Religion leads to neurotic thinking and the desire to control others, he writes. Psychiatry can be used to guide people away from religious thinking and towards more natural views of man. The beliefs of Hitler and Stalin were not driven by Christian morality. It wasn’t believed by either the communists or Nazis, that men had wills of their own, and were created by God for a divine purpose. It was their acceptance of the scientific doctrines of Darwinism and Pavlovian conditioning which led them down the path to murdering millions of their own people. When Skinner suggests the possibility of a science of behavior, which should be viewed from the perspective of men’s actions being controlled by evolutionary history and environmental circumstances, he too is viewing man from a Darwinist perspective. It isn’t the Christian religion seeking to control the nature of man, it is men of science, who have come to see the control of man as being the only way to control the future, who are seeking dominion over our behavior. It isn’t the belief in a universal morality causing chaos in our world, it is the belief that one doesn’t exist.

In our scientifically advanced society, how far has Skinner’s theory on a science of behavior advanced? To what degree are they exercising control over our actions? To what extent do they manipulate our environment to force us to make decisions we would not make otherwise?

“But the environment can be changed, and we are learning how to change it. The measures we use are those of physical and biological technology, but we use them in special ways to affect behavior.” (Skinner, 1971, pg. 101)

To learn more about this topic and others, check out my book Without a Shot Indeed: Inducing Compliance to Tyranny Through Conditioning and Persuasion.