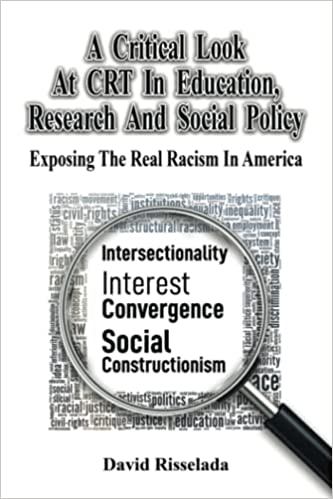 Many Americans believe we have overcome racism. It is evident that African Americans have the same opportunities to excel and pursue their life ambitions as anyone else does. Black people are just as much a part of American society as White people, and enjoy the same rights, privileges, and protections of law as White people do. Not that it has always been this way. There is an undeniable history of discrimination and racism that Black people have endured in this country. No matter what attempts or concessions America has made to fix the problem, racism has become an inescapable concept. One that is no longer viewed as an individual problem, but a systemic one where all White people are guilty under the tenets of the new racial ideology, where we ignore the structures of inequality that protect our white privilege.

Racism has become an inescapable concept because Marxist scholars, obsessed with race, continue to study American society from the perspective of Critical Race Theory. CRT is a heavy-handed concept that most people brush off as anti-racism lessons taught in elementary school to change students’ perceptions of themselves in relation to race. As I discussed in my last article, there is a difference. These lessons fall short of being Critical Race Theory because they focus on changing racial attitudes toward the individual, as opposed to, the systemic and institutional levels. This is called racial idealism and focuses on eliminating the superficial aspects of racism. The real Critical Race Theory calls for “radical political and legal activism against whites and whiteness.” Most Americans do not know what CRT is, and how it is used to critique American law from the perspective that it is still dominated by racial prejudice. For instance, an article entitled Invisible Racism: Male Hegemonic Whiteness in Higher Education, which was submitted as a Doctorate in Education thesis, describes Critical Race Theory as an “intellectual inquiry that began in response to seemingly neutral litigation, continually reproducing white supremacy.” As William Tate said, CRT is not something to be taught to the undergraduate student, it is a framework for law students and PhDs to better understand how laws are formulated, and the effects of law on everyday life.

One of the primary tenets driving Critical Race Theory is the critique of liberalism. Critical Race scholars reject traditional notions of equality under the law and what is commonly referred to as the colorblind ideology. Colorblindness is the idea that CRT scholars claim, allows white people to hide behind their white privilege, and feel comfortable under the false belief that we have overcome racism, and all people are treated equally. The belief in equal treatment under the law, equal opportunity, and equal rights all fall under the colorblind ideology. According to the book, Racism without Racists: Colorblind Racism and the Persistence of Racial Inequality in the United States, abstract liberalism, or what we commonly know as western civilization, is one of the primary contributors to what CRT scholars refer to as, the new racial ideologies. Here is where the Marxist element of CRT becomes evident. Bonilla-Silva suggests that modern liberalism, i.e., the belief in individualism, meritocracy, and universalism, is the result of the bourgeois capitalists and that freedom as a general concept, only applied to the monied classes. This is something commonly taught in school today as a way of discrediting our constitution and our institutions.

While most Americans believe that a colorblind approach to racial issues is the only fair way to allow for real equality of opportunity, CRT scholars argue that it only alleviates the most blatant forms of racism and that racial oppression still exists within the normal, everyday functions of society. Using language common to modern liberalism, which denotes the idea that all people have free choice, or are responsible for their own behavior, white people can ignore the real racial issues which still work to keep Black people oppressed. Bonilla-Silva goes as far as to suggest that white people can make their own racist attitudes towards policies meant to alleviate systemic racism, like affirmative action, appear reasonable and fair-minded by appealing to the tenets of modern liberalism. CRT scholars reject any notions of equality under the law in favor of their own subjective viewpoints, and argue that only aggressive, color-conscious efforts to change the way things are will result in any meaningful reforms.

White America has reached a point where race simply doesn’t matter. Over the past few years, concepts like White privilege have dominated educational discourse, and we are forced to endure teachings that make our great country look like it is seething with hatred towards anyone who isn’t white. Any opposition to such teachings is simply not allowed and will surely leave one labeled as a racist. Racism itself has taken on a new meaning. Whereas in the past, it was the insistence of focusing on racial differences, and the belief held by some, that Blacks were inferior, that made up the face of racism. Today it is different. For instance, Bonilla-Silva cites the French philosopher, Voltaire, when he said that only a blind man would be permitted to see that there isn’t a difference between Blacks and Whites. To believe one race is inferior to another is, indeed, racism. Today, however, it has taken on a new meaning. White people are not permitted to hold colorblind views of racial neutrality. To argue that programs like affirmative action are no longer needed is to hide behind our own privilege while ignoring the institutional racism which demands such programs be put in place. While most Americans, including Blacks, are attempting to move beyond the constant racial discourse, CRT scholars are keeping the issue alive by insisting that race, and a commitment to social justice, be the driving factors in researching the law and social policy. You cannot escape accusations of racism when viewing people as equal is rejected because race isn’t being considered, as a matter of principle.

To learn more about CRT check out my latest book. Now available in paperback.